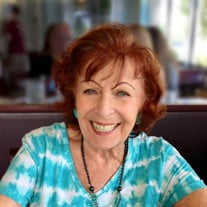 Gisella “Ella” Rippel, 95 of Aberdeen NJ, passed away on April 13, 2020. She was born July 22, 1924, to Herman and Betty Rosenthal in the Bronx, NY. She was well-loved by everyone around her and was known for her joyful, funny and dynamic personality. She had many lifelong best friends growing up and was a member of a social group called the Rex Wrecks, which is how she met her beloved Nat at the age of 15. Soon after she graduated from Evander Childs High School in the Bronx, she and Nat were married on December 28, 1944. They remained married for 49 years until his passing on June 11, 1994. She and Nat moved their family to Wantagh, Long Island in the 1950s and ultimately settled down in Aberdeen, NJ in 1962. Gisella worked as a legal secretary for various law firms throughout the years and was an active member of her community. She was the den mother of her son’s Boy Scout troops and spent over 25 years volunteering her time with Meals on Wheels. She was also extremely philanthropic as she consistently donated to multiple organizations throughout each year. Ella was the epitome of beauty, elegance, joy, and grace. A strong, spirited, kind and generous woman who valued her independence, she inspired those around to her to be the same, simply by leading by example. She left an impression wherever she went, and once you met her, you never forgot her. She was the true embodiment of joy and when she spoke to you, she had the ability to make you feel like you were the most important person in the world. An avid reader, who was rarely found without a book in her hand, she loved to read the newspaper each morning and enjoyed timing herself as she completed the papers’ crossword puzzle. She was a talented writer who enjoyed writing short stories and also loved old movies and music from the big band era such as Frank Sinatra and Nat King Cole. What she loved more than anything, however, was to spend quality time with her beloved family and friends. She is survived by her daughter Sherry Rippel Tonkonow and her husband Barry, four grandchildren, Nicole Rippel Hagerty and her husband James, Kristopher Kaiser and his wife Amy Skryja, Natalia Willis Tonkonow, Adriana Devon Tonkonow, and two great-grandchildren, Grace Kaiser, and Milo Kaiser. She was predeceased by her husband Nat Rippel, two sons Phillip Scott Rippel and Howard Jeffrey Rippel, her parents Herman and Betty Rosenthal and four siblings, Louis Rosenthal, Sam Rosenthal, Paula Sacks, and Anna Rosenthal. Graveside services were held privately. The family will be planning a memorial service and celebration of her life as soon as it is safe to do so. In lieu of flowers, donations can be made to the National Multiple Sclerosis Society.

The family of Gisella Rippel created this Life Tributes page to make it easy to share your memories.

Gisella “Ella” Rippel, 95 of Aberdeen NJ, passed away on April...

Customized sympathy cards. Mailed for you.